The 2017 Central States VHF Society Conference is pleased to announce a dear friend of the VHF+ community as its banquet speaker: Lance Collister W7GJ 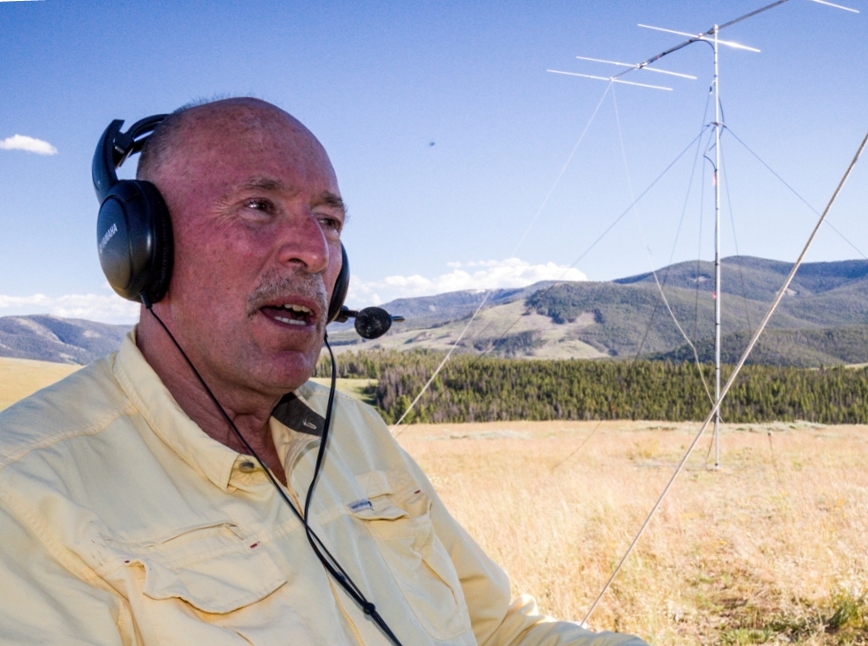 Lance received his first ham radio license WN3GPL in 1965 at the age of fourteen. His first contact was in Lancaster, PA on 2m AM with a Heathkit Twoer. From that first contact, he was hooked on VHF DXing and soon became active on 2m meteor scattter and aurora. While earning bachelor degrees in Physics and Religion, he helped form the Middlebury College Amateur Radio Club. He copied his first 2m EME signal in 1974, and wrote his first moontracking computer program that same year. As WA1JXN in Vermont, he completed his first 2m EME contact by working W6PO on March 17,1978. The following year, he moved to Frenchtown, Montana and on December 1, 1983, he gained notoriety in the worldwide amateur radio community by being the first civilian to contact space, using his 2m EME array to complete a 2m contact with astronaut W5LFL aboard STS-9. He also took first place worldwide on 2m in the ARRL International EME Competition that same year. In the early 1980's, he was active on the Board of Directors of the CSVHFS and helped develop and promote the Maidenhead grid awards that later became the ARRL VUCC program. In September 1999, he achieved 2m DXCC #11, by CW on EME. He made four CW 2m EME DXpeditions to C6 (The Bahamas) and two to ZF (Cayman Islands).

In 1996, he upgraded to Amateur Extra class and constructed his first 6m antenna and amplifier. Later that year, he completed his first CW 6m EME contact with SM7BAE. With the advent of the digital transmission mode of JT65A and expansion of his 6m EME antenna to four nine element yagis, he has completed contacts with 202 countries on 6m, 148 of which were made via 6m EME. He has published numerous articles and guidelines and written computer programs to assist operators around the world in successfully operating EME, and has given many people their first 6m EME contact. In 2011, he was awarded the Jersey Trophy by UKSMG for his work in helping people get on 6m and for his tireless promotional efforts regarding 6m EME. In 2016, he was honored by the CSVHFS with the Mel.S. Wilson W3BOC Award “For Continuous Service & Dedication Towards Promoting VHF & UHF Amateur Radio Activity”.

He retired for medical reasons in 2007, and since then has made 6m EME DXpeditions to E51 (The South Cook Islands), 3D2 (Fiji), 5W (Samoa), E6 (Nieue), TX5K (Clipperton Island), KH8 (American Samoa), V6 (Micronesia), T8 (Palau) and VK9C (Cocos/Keeling) and VK9X (Christmas Island) in September and October 2017. He is credited by the American Radio Relay League with completing fourteen 6m "firsts" from the USA to new DXCC. On his birthday in 2015, he completed a 6m EME contact with KB3SII and K1WHS in FN67, and received the seventh FFMA award issued. Lance has demonstrated the ability to keep up with technical developments and successfully use new modes to capitalize on the propagation opportunities available on 6m. Much information about his 6m weak signal work - as well as his previous trips to activate rare countries for the first time on 6m EME, and his free GJTRACKER moon tracking program – are available on his web site.

In addition to his amateur radio activities, Lance enjoys singing bass in various choirs. He toured with the Middlebury College Choir, has sung with the Missoula Symphony Chorale for over three decades, and participated in Eric Whitacre's Virtual Choirs 3 and 4. He also was accepted to sing in Disney's World of Color Honor Choir, which is a virtual choir opening Disney's World of Color program at Disney World. Lance also sang with Eric Whitacre at Lincoln Center in New York City at the end of March, 2014, and is scheduled to sing at Carnegie Hall in April 2018. He serves on the Board of Directors for the International Choral Festival, which brings choirs from all over the world to Missoula, Montana every 3 years. He sings in his church choir at Holy Spirit Episcopal church in Missoula, Montana. For the past three years, he has ridden his mountain bike in the Missoula Symphony Fundraiser, the Ovando Gran Fondo.

Lance married Judge Karen A. Orzech in 1996, and has one daughter, Brittany, who is married with a young daughter of her own.